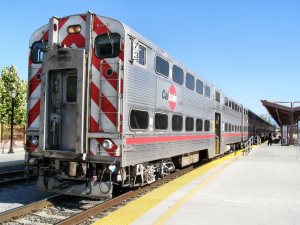 Choo choo! All aboard the express service to the 1980s!

I never thought I would miss the London Underground. I take back all the salty words I showered upon it during all those years I slaved and sweated through it like a sardine in a tin (or should I say, a sardine in a tube).

But these days I find myself reminiscing for the “tube” as I go through my morning commute on the DC metro system, also known by the awkward acronym WMATA (Washington Metropolitan Area Transit Authority).

It really hit home for me when, shortly after I returned to the US in January of this year, I was taking the Caltrain between San Francisco and Silicon Valley. Mind you, this is one of the wealthiest, most technology advanced regions of the country, not to mention one of the top five most densely populated metropolitan areas in the US. So really, an ideal place to be making an investment in mass transportation.

Instead, you find yourself in the ghetto-fabulous, retro-tastic cattle car that is the Caltrain. One time when I was getting off the Caltrain, I noticed a plaque on the wall near the door. Now first of all, let me tell you, getting off the Caltrain is an awkward affair, requiring you to descend a set of large metal steps and breach a not insignificant gap onto the platform below. Every time I got in and out, I was reminded of trains I had taken in India and Romania. Well, as I was clambering out one day, I spotted this plaque, which read:

So let’s get this straight. It’s 2014. This train is nearly 30 years old. And it was lasted updated 12 years ago. Clearly, we Americans are not investing much in public transport.

One European friend, when taking the train from New York City to Connecticut, was shocked by the state of the Metro North Commuter Railroad carriages (anyone who has taken the ultra-modern, smooth-sailing trains in Holland and visited the US after would probably have the same reaction). And the same story seems to apply not only to the trains/subways/buses themselves, which are usually much older and more rudimentary than their counterparts in Europe, but also to all the infrastructure (or lack thereof) surrounding the public transport.

Take, for example, the ill-designed, user-unfriendly machines that patient passengers must use to make payment for the BART in San Francisco. They look like they were designed by an amateur engineer in the 1990s. Or the entry/exit gates at subway stations. Every time I tap in and tap out of the DC metro – waiting for the clunky gates to slowly open and close, waiting for the card reader to process the last transaction and turn from red to green, and waiting for the next half dozen people resignedly shuffling in front to do complete the same pattern – I think back to exiting the London Underground at King’s Cross station at rush hour, being one of hundreds of passengers swiftly flicking through the modern Oyster card-reading barriers in split seconds. It’s only now that I’m realizing what a well oiled system it was.

It’s a long walk to the cleaner’s.

I went home over the weekend to visit family and friends. We drove to the strip mall near the house. Actually, we could have walked, given that it is just less than one mile from the house. But, that was clearly out of the question. We were, after all, not carless.

So, we walked to the ice cream place. And by “walked,” I mean went went back to the car (which was parked right next to the sandwich shop), got in the car, drove to the other end of the strip mall, and re-parked the  car in front of the ice cream parlor. Because this is America, and that’s what you do. Why walk when you can drive? If you want exercise, just go to the gym, stupid.

Look left, look right. Or was it right, left? 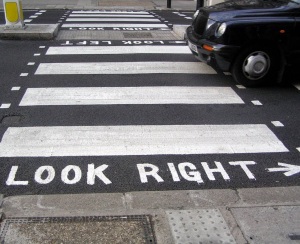 In the months leading up to my return to the US in January, I spent a lot of time in countries where the traffic drives on the left-hand side of the road. Not only the UK, but also southern Africa, Singapore, Australia, and New Zealand.

As a pedestrian, I got used to looking right, and then left, before crossing the road. Even if I hadn’t been used to it, in London I was constantly reminded of it by the friendly “LOOK RIGHT–>” signs painted on the road next to the crosswalks, which had no doubt been installed to reduce the incidence of left-looking tourists getting mowed down by buses, which is not good for the tourism industry.

Well, I don’t blame them, because this is a surprisingly difficult habit to learn or unlearn. In my first few weeks back in the US, I had to make a conscious effort to remind myself when driving and bicycling that the default position was the right hand side of the road (oddly enough, my brother seemed slightly stressed about lending me his car and bicycle).

One thing that struck me is that the right-hand / left-hand traffic distinction seems to apply not only to the movement of vehicles along the road, but also the movement of people along the sidewalk or other thoroughfare. What I mean is that if you are walking down a sidewalk and someone is walking toward you, then you sort of instinctively or subconsciously follow the national road rules when passing that person. In the UK, you would pass the person on the left; in the US, you would pass them on the right.

It is something you do totally without thinking. The only reason I became consciously aware of it is because I found that, when I returned the US, I kept on doing these awkward sidewalk dances with people – as they approached me, I would move left, but meanwhile they would move to the right (my left), so that we were still walking right toward each other. Then there’d be a bit of odd bobbing/swaying, followed by a shuffle to the right and a mumbled apology on my part. I’m sorry, you’re right… about being right.

A carless person on the fringes of society.

For the first time in my life, I’m in Texas. Growing up in Connecticut, my family never really had the means to take many family vacations, at least not far within the US (and certainly not abroad); we would usually just drive to the Pocono Mountains in Pennsylvania and stay in a rustic cabin by the lake for a week. Occasionally I would make trips to Missouri or Ohio to visit my grandparents. But, other than that, I saw very little of the US. Then I left the US when I was 18 and proceeded to travel to some 65+ countries across 5 continents over the next 15 years.

Now my very well traveled self has come back to the one region that I’ve barely seen at all: the United States. I’ve certainly visited far more countries in either Africa or Europe than states in the US. As I start to explore my own country, I see that each state is almost like its own country. OK, maybe not Connecticut and Rhode Island. But TEXAS is certainly a world onto its own. Texas deserves its own blog.

One thing I noticed immediately about the state “where everything is bigger” is the ultimate manifestation of American car-culture. More so than anywhere else I’ve been, the land is big, the roads are wide, everything is far apart, and you are hopeless without a car.

I learned a new vocabulary word shortly after getting off the plane. A middle aged couple were talking about making plans to meet some younger relative of theirs. The woman said in a hushed and concerned tone, “But she is carless.” She might as well have said that the girl had polio or had dropped out of school, because the man’s response was “Oh no, that is a problem.”

It’s not even a case of it being pedestrian unfriendly; it’s something much more fundamental than that. It’s as though without a car, you aren’t a person. The cars ARE the people. When you drive around (because you sure as hell aren’t walking around), you don’t see any people; you see cars.

I became so used to it that when I did spot a lone man walking along the side of the road in a suburban area, I was surprised and confused and asked my friend, “What is that man doing? Is he homeless?” And she responded, “No, he’s just carless.”